CATCHER'S MITT: CATCH AND RELEASE- CONVERSATION WITH AN LSU PROFESSOR

Some comments were made that using a Catcher's Mitt might be bad when you plan on releasing a fish because of the slime it removes. So I did some research and reached out to William E. Kelso, Ph.D. He is Associate Director and Graduate Coordinator, F.O. Bateman Professor of Renewable Natural Resources, School of Renewable Natural Resources, Louisiana State University Agricultural Center. Q: There has always been a concern that when you handle fish, you remove some of thei
14 views0 comments
Mark A. Cartwright

Catcher's Mitt: Mitt; The Whole is Greater than the Sum of its Parts.

The Catcher's Mitt is made up of several quality parts. One of which is the Mitt. The mitt is the heart of the Catcher's Mitt. To quote a cliche, it is where the rubber meets the road. Almost literally! The mitt starts out as a one finger poly-cotton shell, mitt. It is then coated on the inside with rubber and then dipped in rubber. When it is pulled out of the dip, it is sprayed with acid. This gives it the crinkled texture that gives it good gripping power. God gave u
6 views0 comments
Mark A. Cartwright

Several years ago there was a magical place called Sportfisherman-com. (I won't even type it as a website because it is gone) All sorts of people hung out in the forums there. There were many characters that hung out and shared their knowledge and wisdom. A few of them had their own forums inside. Marty Hiatt had a little place called Wahoonbox: Welcome to my World. There was an eclectic group that hovered around in there discussing all manner of things that matter to ang
51 views0 comments
Mark A. Cartwright

Catcher's Mitt: Reel; The Whole is Greater than the Sum of its Parts.

We call it a reel, but it is really a retractor. It keeps the mitt of the Catcher's Mitt snug up against the reel. This is what makes the whole system work so great. The reel has 36" of stainless steel cable that is in a plastic sleeve. The spring tension will hold 6 ounces up tight to the reel and as you put your hand in the mitt and reach out, the tension increases aiding in getting your hand all the way in the mitt. The reel attaches to the sheath by a rotating stainles
5 views0 comments
Mark A. Cartwright

All the names of the models are in the baseball vernacular. Rookie has it all; mitt, reel, towel, pliers and sheath. A five tool player if you will. We have had a little push back with that name because people weren't thinking of it in baseball terms but in general. Rookies in general are thought of as someone new to something. But in baseball, a rookie, especially in the Show, is a really good baseball player. Last year Alex Bregman was a rookie for the Houston Astros.
2 views0 comments
Mark A. Cartwright

If they are not on their feet, they are hard to kill.

Hunting on King's Point last week with my best friend was a hoot. It is always great to get with Mark Thompson. We became friends when I moved to Alexandria in the 7th grade. We have been hunting and fishing together ever since. The deer were scraping like crazy. When you see deer scraping under a vine that is hanging straight down from a limb high above............ scraping under a vine and tearing it up around the cane. But they were not seeking or chasing yet during th
5 views0 comments 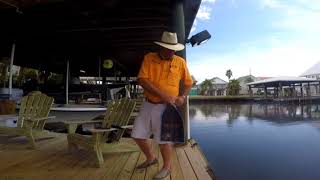 How to put on a Catcher's Mitt.

EXTREME FISHING REPORT. This week's adventure was out of Venice, Louisiana. Captain Ronnie Daniels invited me and some other friends down to do some tuna and maybe some swordfish fishing. 3 to 4 foot seas were no problem for the Relentless Charter's 36' Yellowfin center console we were in. First up was swordfishing. Everything about daytime swordfishing is extreme. From a 16" fresh squid for bait, a almost full throttle 15 second run from where the bait is dropped with a 6 po
8 views0 comments
Mark A. Cartwright

You're Not Holding Your Mouth Right

Your dad is in the front of the boat and he is wearing you out. You ask what he is doing that you are not doing and he says, "you're not holding your mouth right". How many times have we heard that? Dad would be in the front of the boat throwing a green and white H&H and so would I. He would be catching regularly and I would be lucky to catch one. Of coarse a lot of it had to do with him having more experience and FRONTING me! Last week I talked about an old dog learnin
5 views0 comments
Mark A. Cartwright

You have heard the old cliche' that you can't teach an old dog new tricks. Well you can! And I was the old dog. My buddy Ronnie Champlin, invited me to his camp that he has in Point Fourchon for the weekend and the conditions were perfect for fishing. Ronnie is a Title Attorney and his company's name is Champlin Title. He is also a rabid LSU baseball fan. We met while Alden was playing baseball for the tigers. The camp and setting were tremendous. Louisiana is truly a S
11 views0 comments
Mark A. Cartwright

Go ahead; fight your catch in the water. . . but bring it into the boat with ease!

What if you could control your catch with ease from the moment it leaves the water until you’re ready to release or clean it? With the Catcher’s Mitt®, you can do exactly that. Imagine handling your catch without cuts, scrapes or slips. The Catcher’s Mitt five-part design gives you the ability to accomplish that with ease. The Mitt The Catcher’s Mitt gives you flexible protection with the durable one finger mitt. The water-resistant mitt is coated inside and out with rubber
3 views0 comments
Mark A. Cartwright

How to Use The Catcher's Mitt!